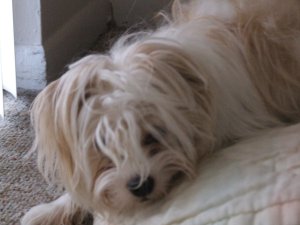 So I took Yuki to the vet today to have his teeth cleaned. Mind you, this is going to cost me $165 because they have to put him under general anesthesia to clean his teeth. Up until last night I was fine with it but last night I woke up about 5am thinking the worst of what could happen to Yuki while he was under anesthesia. By the time it was 7am, I was ready to cancel his appointment. Well I said another prayer before getting out of bed, another prayer after I got out of bed, and yet another prayer while driving to his appointment. I was seriously bending God’s ears as if I was the only one who needed help! I finally arrived at the vet and bam, they try to hit me up for more money with what I believe is a sort of scare tactic and that irritated me even more. When he went for his yearly check-up and shots the week before, I specifically asked for a complete price for the dental procedure and everything that was associated with it and was told $165; but this morning the front desk girl said “we don’t have to pre-screen Yuki to make sure he is alright to go through the procedure but it will cost you an additional $65 if you want us to draw blood and pre-screen him just to make sure all is well before we do the dental procedure!” WWHHAATT!!!! Are you @$%#&*( kidding me right now? What the hell do you mean ” we are not required to pre-screen?” Why is it not required and by whom? I know for damn sure pre-screening is required for humans so why not dogs? Is it because they don’t walk upright, talk and have the right to sue you for anything that goes wrong out of the ordinary? Damn, I should have followed my mind and gut that were in sync about cancelling Yuki’s appointment.

After watching Yuki being taken to the back and his all black eyes begging me not to let him go, I left the vet’s office with a heavy heart. All the way back home I told myself that I was doing it for his own good, a preventative if you will because I don’t want him to have any dental problems. He is already very healthy and I just wanted his mouth to be just as healthy. When I walked through the front door of my house, I was greeted by my hubby who noticed that I was less than cheerful and inquired why. I told him my concerns about Yuki’s impending procedure and he told me not to worry because Yuki would be quite fine. Wouldn’t you know it but in less than an hour’s time hubby had to go off to work leaving me with my overactive imagination that was eager to grip me with fear once more. I made a conscious effort to block out the unmistakable fact that the house was now quite empty without Yuki by surfing the net and trying like the dickens to be patient about waiting for the vet’s phone call.

Around 11:30am I received a call from the vet telling me that it was not necessary to do a dental procedure on Yuki at this time because he had less than minimal plaque that I could clean myself and she would show me how once I got there. I was so excited that I promised to be there in 15 minutes tops which would mean a “take no prisoners” type of driving for me. Drivers must have known that I was coming because the road was surprisingly clear when I was on my way to pick up Yuki from the vet. I was more than overjoyed that he did not have to go through the procedure, my prayers had worked once again. God had answered and I was more than thankful. I got to the office and explained what the other vet had told me the week before why I made the appointment. This vet told me that Yuki might need the procedure when he was either 4 or 5 years old but not now and after she showed me how to clean his teeth using simple gauze and pet toothpaste it would be a preventative step until he needs a proper cleaning. The whole ordeal turned out to be free of charge. What a bonus! Tell me God wasn’t listening? I know he was, too many good things were happening and I know I did not do them. This by far was worst than when Yuki was spayed. Whew, what an ordeal. I am more than thankful that it is over and things turned out for the best. Just goes to show that prayer from the heart works every time. All I can say is, “thank you Jesus.”

P.S: This makes me wonder if there is a way for me to start a non-profit organization geared towards assisting owners with their pet’s health and dental care with the stipulation that all participating vets MUST pre-screen the pet to make sure that they are healthy enough to withstand the pending procedure. Of course the non-profit would pay for it all. Anyone have any ideas?

© 2011-2020 Chelle Ang. Unauthorized use and/or duplication of written material or photography without express and written permission from this blog’s author and/or owner is strictly prohibited. Excerpts and links may be used, provided full and clear credit is given to Chelle Ang with appropriate and specific direction to the original content.